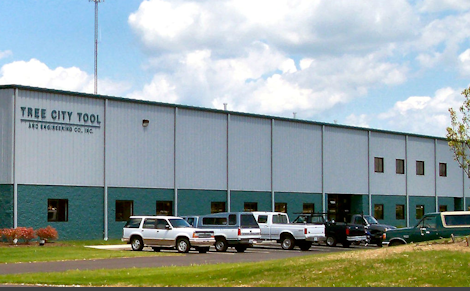 The company is located in Greensburg, Indiana which is just off of I-74 in the southeastern part of the state. The company moved to it’s present address in 2006. We have a 32,000 Square Feet – 7 Acre Facility. Tree City Tool services the automotive, and appliance industries as well as other specialized industries. We have the ability to design and build per customer specifications from the ground up including controls and programming. Our design staff uses Autodesk Inventor and typically we provide machine, controls and program documentation on CD. We have the ability to ship most machines and equipment on our own truck. For larger projects we have very reputable riggers we have worked with for years. Additionally we have many years of experience working with international shipments thru expediters and agents as may be required. We service what we sell thru our own servicemen. To support the service we maintain records of machines and equipment until we have been informed that they have been removed from service. We currently have machinery in operation in ten states and eight countries.